Seventh Generation has announced on its blog, Twitter stream and FaceBook page that “co-founder Jeffrey Hollender’s employment relationship with the company has ended.” 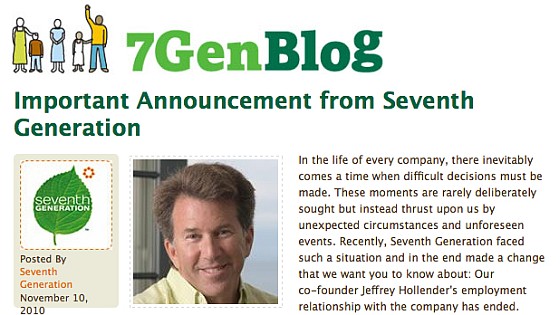 The announcement, on November 10th,  came eight days after the news broke on Marc Gunther’s blog, more than two weeks after employees were informed that the board had “decided to end the company’s employment relationship with Jeffrey…without cause” and a week after Hollender himself posted the news on his FaceBook page, along with a link to the Fast Company story about his firing. 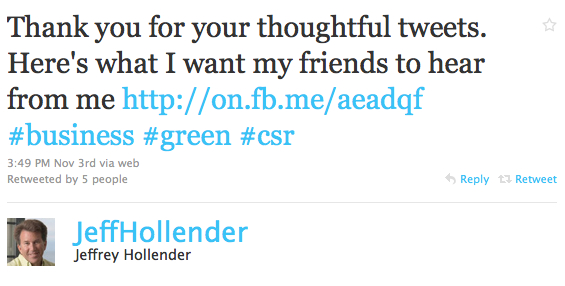 I know the PR people at Seventh Generation. My firm did some work for them, and thanks to  my personal blog,  I was Seventh Generation’s guest at Expo West, where I met Jeffrey Hollender and Chuck Maniscalco.  I suspect the PR professionals and their Agency of Record knew the right thing to do: announce Hollender’s departure with the same straightforward talk made famous by Seventh Generation’s annual Corporate Consciousness report and in keeping with the company’s commitment to being “the most trusted brand of household and personal-care products for a healthy home.”

But instead, the announcement was delayed for two weeks while scores of blog posts, news articles, and tweets from the most well regarded voices in the sustainability and CSR worlds relayed the story. There was much speculation about the “real reasons” for Hollender’s ouster. Many, sounding shocked and angry, expressed doubts about Seventh Generation’s ongoing commitment to sustainability.

Seventh Generation’s announcement, with the stilted tone of a communications piece written by committee, acknowledged, “We recognize that you may have questions about this change that are not fully answered by this announcement. Transparency has been a hallmark of Seventh Generation and we want to assure you that transparency about our products and our business practices will continue, because we think you have a right to know. We hope you understand that there are instances where honoring privacy and personal circumstances are equally or more important considerations, and this is just such a case.”

Of course in any issue affecting personnel, there are privacy issues. However, there are ways to respect privacy while still remaining transparent to company stakeholders – particularly when a central part of the brand’s ethos is what Seventh Generation defines as “Radical Transparency: being transparent about our business and product practices.”

Board members often insist that matters of executive transition be treated with the utmost discretion, and typically, executive severance agreements stipulate privacy as one of the many terms laid out in these agreements.    Privacy is entirely appropriate and workable if the executive in question is not a public figure. In the case of Seventh Generation, Jeffrey Hollender was not just “an employee,” he was the company’s Inspired Protagonist, Chief Blogger, and a revered, trailblazing leader in the B Corporation and corporate social responsibility worlds.

Now that the news is out, the hard work begins: restoring the public’s trust in the brand. The lawyers and Board members who likely crafted that stilted blog post, and hemmed and hawed while the news went viral?  They’re back to work on other matters.

It’s the job of the Marketing and PR team to clean up the damage to the brand.

How can companies guard against making PR mistakes during a moment of crisis? How do you maintain your corporate reputation and protect the brand? These are critical questions for all companies, but particularly for the new breed of “ethical corporations,” B Corporations, and social entrepreneurs.

Here are some of the crisis management principles I’ve long followed in my corporate career, and now urge my clients to adopt. They’re focused on the three stages of crisis management as defined by the Institute for Public Relations: (1) pre-crisis, (2) crisis response, and (3) post-crisis.

1.    Top-Down, Open Communications. Make sure there is a direct line of communication between the Board and the company’s senior communications professionals and the senior counsel at the Agency of Record.  What happens if the CEO or the CMO is fired, and the Board does not know to whom it should turn for counsel?   Be sure the Board understands which Board-level management actions should trigger notice to the PR team.

4.  Don’t be a slave to your media monitoring metrics. Communications professionals now have at their beck and call a dazzling array of media monitoring and sentiment analysis tools. It’s easy to look like an expert – with “Klout scores” and more to back up assertions about “who matters,” who’s an influencer, and who’s not. And it’s tempting to think that a lack of online response means that nothing’s changed, even when bad news has come out about your company’s products or marketing campaigns. Top communications and marketing professionals don’t over rely on numbers. It’s important to use human judgment and to validate what the online statistics say through focus groups and through good old fashioned techniques such as check-in calls to editors (using that old fashioned device, the telephone) and editorial roundtables and in-person briefings. Now’s not the time to hunker down and hide behind online influence charts.

5.  Don’t be afraid to respond to blog posts and to correct information that is erroneous. Many PR firms advice against this. Guess why? They’re afraid of bloggers. Truly. Some of the biggest  and “best” PR firms in the nation have admitted as much.  Here’s a sampling of the blog posts and news articles published prior to Seventh Generation’s announcement on November 10.

6.  Re-evaluate previous agreements. For legal reasons, Boards do not typically disclose firings. But once the aggrieved Party acknowledges it publicly – as Hollender did when he posted the Fast Company article – all bets are off. What is contained in your company’s executive agreements?   They need to be updated to reflect the fact that once previously confidential terms are disclosed publicly, the Company reserves the right to confirm the facts in order to uphold its primary brand promise: trust.

7.  Keep a tone that is consistent with all of your corporate communications. For Seventh Generation, announcing Hollender’s departure via blog post was a good move. It’s consistent with the way they’ve always communicated. But the tone of the Seventh Generation announcement is not that of the Seventh Generation brand that people know and trust. A more radically transparent post might have said, “We screwed up. We should have told you two weeks ago that our Board of Directors fired Jeffrey Hollender. This has not been an easy time for our company. Many of us are grieving.   But that’s no excuse for not letting you hear the news from us, instead of through the media. We’re sorry….”

8.  Remind the public of your company’s commitments. Among the many emotional online responses to the news about Hollender’s departure were insinuations that somehow the company’s products had changed. Rationally, we know that the products are the same as they were two weeks ago, before this controversy erupted.  It may be that public anger over the Better Business Bureau’s recent ruling requiring changes to Seventh Generation’s advertising – and Seventh Generation’s lack of public comment on it – fueled some of the bitter online commentaries that came up after the news of Hollender’s firing leaked.

9.  Conduct a post-mortem. Once the crisis is over, it’s tempting to want to forget about it and get back to the old routine. Important tasks may have been neglected in order to handle the crisis.  “Real work” calls.  But it’s critical to gather all the players who were involved in the crisis and to lead a post-mortem review of what transpired, what worked, what didn’t, and to update the crisis communications plan accordingly. This should be scheduled within two weeks of “normalcy” returning to the organization, and the process should be led by the Chief Communications officer and the Agency of Record with the full support of the CEO and the Board.  Why expose all your dirty laundry to your Agency? Because if you’ve got a good agency, they’ll tell you what you may not want to hear. The danger for all companies – but especially for mission-driven firms – is that insiders develop a myopia that prevents them from understanding how they are truly perceived by outsiders. This is where good advice from seasoned outside PR counsel is invaluable.

10.  Put together a strategic plan to re-store the brand. First, start with research. Figure out how perceptions of the company have changed. Beware of over relying on the stats that media monitoring software spits out. And in Seventh Generation’s case, given the brand’s rapid expansion into new channels such as Walmart, sales figures won’t tell the story of its lost “deep green” consumer base. Marketing and communications is as much art as science, and human relationships are at the heart of this delicate balance.   Customer summits and in-person media briefings get at the heart of a brand: emotion. Scores don’t reveal emotion. Real life conversations do.

What do you think?  Leave a comment and let me know!

4GreenPs connects green brands with mainstream consumers and helps mainstream brands go green with a full range of  CSR and sustainability communications services. Want to talk about how I can help you? Contact me at lynn at 4greenps dot com.